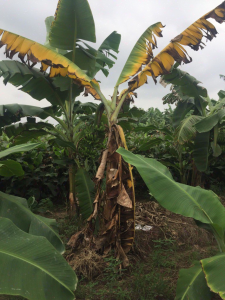 “Support to the conduct of field activities for banana Fusarium wilt disease TR4 surveillance and diagnostic operations” is an ICERD-led and FAO-funded the TCP regional project in support of Capacity development on diagnostic and surveillance system of banana Fusarium wilt disease (TR4) (TCP/RAS/3619). Project was formulated in 2018 (two years implementation 2018 to 2019) and is being implemented in 12 province of Vietnam including Lao Cai, Son La, Lai Chau, Hung Yen, Ha Noi, Nghe An, Quang Ngai, Dong Nai, Binh Phuoc, Tay Ninh, Long An and Can Tho.

The project is led by the Initiatives on Community Empowerment and Rural Development (ICERD) in partnership with the Plant Protection Department (PPD) – MARD, through the Plant Quarantine Diagnostic Centre (PQDC) and it involves The Crop Production and Plant Protection Sub-Department in 12 provinces including Lao Cai, Son La, Lai Chau, Hung Yen, Ha Noi, Nghe An, Quang Ngai, Dong Nai, Binh Phuoc, Tay Ninh, Long An and Can Tho to survey and collect samples of banana Fusarium wilt disease TR4.

Banana is the largest quantity of fruit traded internationally and domestically. It support about 8 million farmers in Asia for their daily income. About 99 percent of the banana fruit traded internationally are source from the Cavendish cultivars and local cultivars are popularly traded domestically. The industry is beset with the damage cause by the Fusarium wilt. The disease race 1 have cause complete collapse in the international trade of Gros Michel in the early 1900’s  and recovered after the introduction of Cavendish in 1920’s. However, in the 1980’s, the Cavendish cultivars also succumb to the disease race TR4. The disease could not be eradicate by using chemical and the spore remain viable in the soil for decades. The disease can spread through movement of planting materials and also soil attach to non-hosts.

In Asia, the Fusarium wilt disease Fusarium oxysporum f. sp. cubense TR4 was detected in Taiwan in 1980’s and later spread to Indonesia and Malaysia in the 1990’s. The disease is currently spread to China and Philippines. They are also reports to indicate that the disease have been found in India and Vietnam. However, the National Plant Protection Organization (NPPO) (governing authority of any government such as Plant Protection Division, Ministry of Agriculture) to act on matter related to plant protection and quarantine activities) of Cambodia, Lao PDR, Myanmar, Thailand and Vietnam have reported to observe TR4 infesting banana areas and request assistance from FAO to provide technical support in controlling the disease since they are worried that the disease will spread and  affect their banana production for national and export markets which are cultivated by small farmers.

A regional TCP project leverage on the important of detection surveys to determine the status and extend of the banana TR4 disease infestation in the recipient countries to mitigate and prevent spread to new areas.

The proposed project is aim in building the capacity of the 6 recipient countries i.e.  Cambodia, China, Laos, Myanmar, Thailand and Vietnam to develop and advocate all compactible options to mitigate the incursion and preventing the spread of banana TR4 disease and reduce pesticide usage. This result will lead to better human health and promote safe trade using multi-disciplinary approach and international standards.

“Support to the conduct of field activities for banana Fusarium wilt disease TR4 surveillance and diagnostic operations” implemented in Vietnam relates to the output 1 and 2 of the project listed above.

The activities/services under this Letter of Agreement shall be implemented from August 2018 and the reports/ deliverables should be produced no later than 30 June 2019.